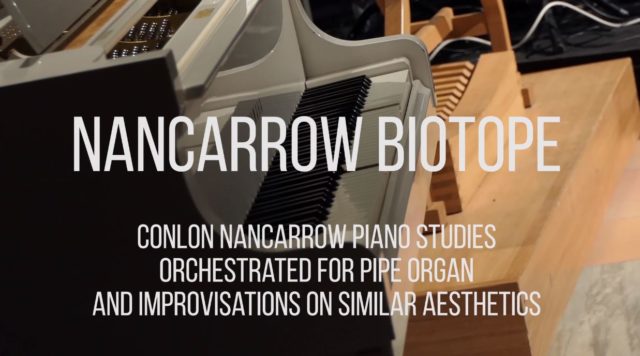 Conlon Nancarrow (1912– 1997) is well known for his studies for Player Piano, as the intricate compositions would often exceed human performer limitations. He coded the music on paper rolls to be performed by the mechanic instrument. In this manner, he created complex, jazzy and hypnotic compositions based on algorithmic techniques and complex mathematical relations. These techniques influenced the melodic, rhythmic and tempo relations in the music. Still:

«My essential concern, whether you can analyze it or not, is emotional; there’s an impact that I try to achieve by these means.» (Conlon Nancarrow)

In the current project, some of these studies are orchestrated for Pipe Organ, Disklavier and electronics by Øyvind Brandtsegg. The work with the Nancarrow Studies also instigated further exploration of improvisation with these mechanic instruments in combination with improvisation software written by Brandtsegg.

As each Pipe Organ is unique, the orchestration is necessarily also unique for each instrument. Two concerts of this material (in Stavanger Concert Hall and Nidaros Cathedral) show how differently the music is shaped to match the possibilities of these two instruments and venues. Nancarrow’s music requires a quite extraordinary degree of articulation due to the rhythmic passages and high tempi.  Sometimes an individual adjustment of each single note would be required, due to slight differences in timing between organ pipes. These differences stem in part from the acoustic construction, but even more it is due to the different positions of pipes in the room. The speed of sound is rather slow, and a spatial difference of 10 meters between pipes (which is not uncommon) can result in a time difference of 30 milliseconds. Compensating for such time differences has been crucial for precise rhythmic articulation and synchronization between voices.

Algorithms and automation are ubiquitous in our modern society, and Nancarrow’s compositions allow an interesting perspective on automation and mechanization within an expressive aesthetic context. It also sheds light on the necessity of manual labor of implementation and adaption to make the algorithms matter for human communication.

«The stuff is fantastic… You’ve got to hear it. It’ll kill you.» (Frank Zappa)

«Conlon’s music has such an outrageous, original character that it is literally shocking. It confronts you.» (John Cage)